Wow! I have been to the Okinawa Island 沖縄本島 twice in the last 14 months yet I still can’t resist booking myself on Jetstar’s new direct airline route to Okinawa! Since flying to the tropical island is now more affordable and convenient, I figure more Singaporean travelers will be visiting the island soon. So if you are planning to travel to Okinawa, here are some tips on how to get the best travel experience to the Japanese Hawaii.

Ways to fly to Okinawa

Previously, the only non-stop flights to Okinawa you could find were the special chartered SilkAir flights. The usual (indirect) ways are to fly into Japan and make a side trip to Okinawa on a domestic flight. Or take an international flight to Okinawa with a stopover in cities like Seoul, Taipei, Beijing or Hong Kong. Airlines that fly to Okinawa’s Naha Airport 那覇空港 (OKA) include full service carriers (like ANA, JAL, Cathay Pacific, Singapore Airlines, Asiana, EVA Air, China Airlines) and budget airlines (like Skymark, Jetstar, Solaseed Air and Peach).

Whatever airline you choose, do note that there are 3 terminals at the Naha Airport – the Domestic, International and LCC (Low Cost Carriers) Terminals. If you have a choice, avoid the LCC Terminal or manage your expectations beforehand. The Naha LCCT has the most basic facilities and has next to nothing in terms of food or shopping. I admit I was ‘shocked’ to be greeted by a spartan airport on my last flight to Okinawa in Jan 2017. I did a double take as I couldn’t believe that a popular tourist destination like Okinawa could have such a pathetic airport! I’m not sure if this is only a temporary arrangement but I do hope that the LCCT will get better soon.

Walking from the airplane to the LCCT building image source

The 2 airlines that currently use the Naha LCCT are Peach and Vanilla Air. If you are flying to Okinawa on these airlines, here’s what to expect. Upon arrival, you will need to go down the airstairs (with your 10kg carry-on luggage) and walk to the airport building. There won’t be an air bridge to connect you directly to the arrival gate. Airport staff will manually bring checked in luggage to the baggage claim area as there is no luggage carousel here. To get out of the terminal, you have to take the complimentary airport shuttle bus to the Domestic Terminal where the public transport is. 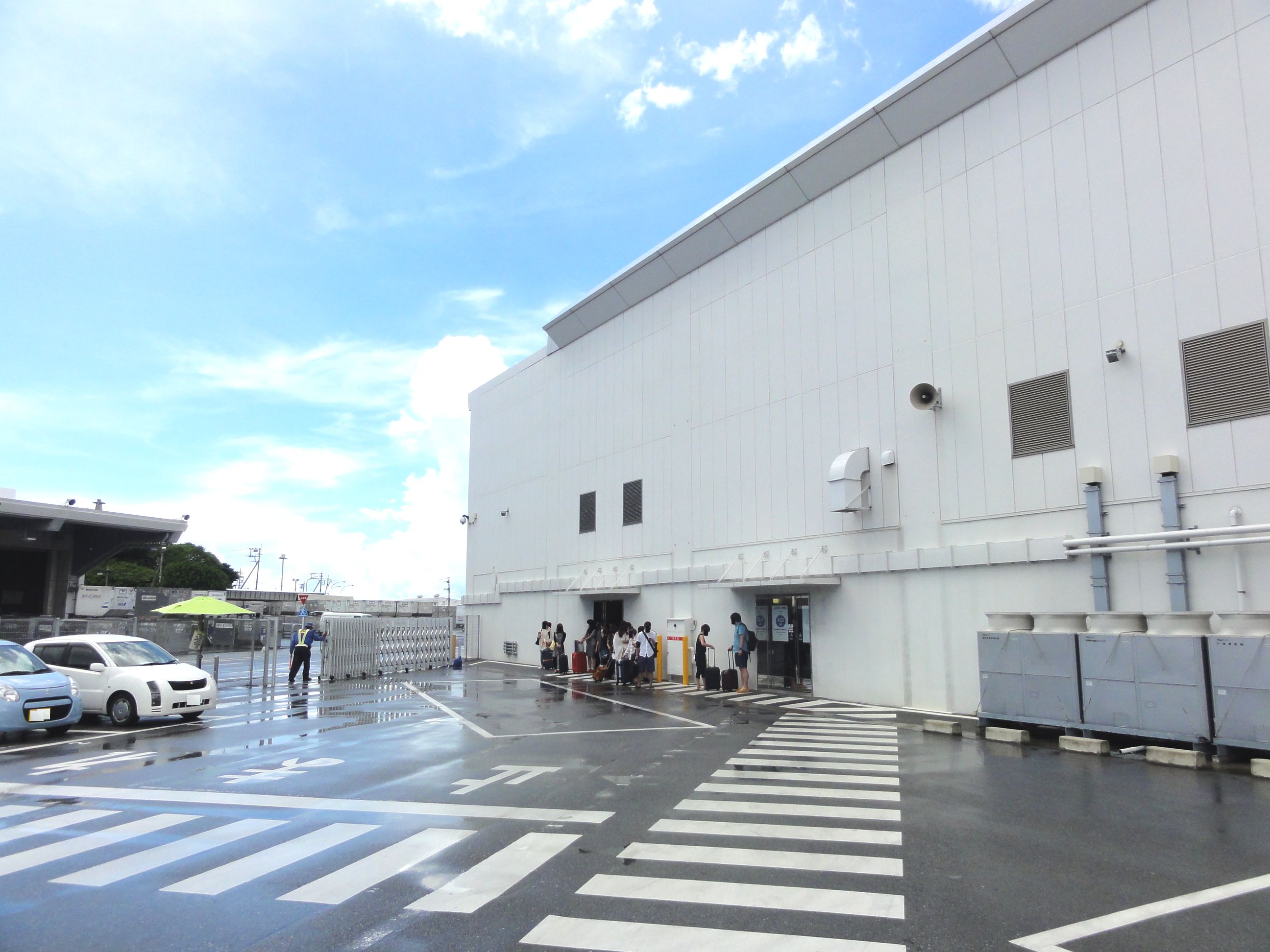 If you are flying out of this LCCT, make sure you factor in time for traveling to the Terminal from the Domestic Terminal (via the airport shuttle bus). There is no other way unless you are arriving on the car rental shuttle bus. And have your meals before going to the LCCT too. One more thing to note is that ALL your carry-ons (yes, including your shopping bags and handbags) will be weighed at the security checkpoint. The last time I was there, staff was strict in making sure that passengers didn’t exceed the 2-bags and 10kg allowance. Many were caught by surprise if not upset.

I am therefore very relieved that Jetstar lands at Naha’s Domestic Terminal and not the LCC Terminal. Other LCCs (like Scoot, Eastar Jet) fly to the International Terminal but none of these fly direct from Singapore.

Choose day time flights or stay near the airport

My last trip to Okinawa (in Jan 2017) was on Peach from Taipei and I arrived at 8.25pm (LCC tend to have those odd flight timings). After getting picked up by the car rental shuttle bus (about 20 minutes ride) and settling all the paperwork at the car rental company, I drove for more than an hour to reach the beach resort I was staying at. I only got to check in at the hotel at 11pm!

So if your flight (on whatever airline) arrives at night, it’s best to stay near the Naha city for the first night. The airport is about 20 minutes away by monorail. The same applies if your return flight is early in the morning.

Check out the Domestic Terminal

Already made travel plans to Japan? Why not make the most of your holidays by making a trip down to Okinawa as well. Or fly first to Okinawa and then to Japan. Just to give you an idea how you can cover both Japan and Okinawa in one vacation. Last June, I flew to Okinawa from Fukuoka Airport 福岡空港 in Kyushu 九州 (most accessible airport in Japan, only 5 minutes from Fukuoka downtown by subway) on Skymark. Come Dec this year, I’m flying to Kansai Airport 関西空港 (KIX) in Osaka from Okinawa. There are other options you can consider too since Okinawa is well connected to many cities in Japan.

Inside a Skymark cabin image source

I would fly Skymark again if I have the chance. It has cheap fare, good service plus a free 20-kg checked baggage allowance. But you can only book their seats at most 4 months in advance. This makes it somewhat inconvenient if you want to confirm your travel plans earlier. For example, seats for flights between 29 Oct 2017 and 8 Jan 2018 are only open for reservation from 29 Aug 2017. So for my Dec trip, I had to book Jetstar flights (no free checked baggage 🙁 ) instead so that I could settle all the accommodation and car rental as early as possible to beat the peak season crowd.

Whichever way you choose to fly to Okinawa, you will find that one visit is not enough. You’ll likely want to return again to this beautiful Japanese island, just like me. More about my Okinawan trips in my next blog post … 😉

This site uses Akismet to reduce spam. Learn how your comment data is processed.

Subscribe to My Blog for More Travel Ideas and TIps